A surprising property of word vectors is that word analogies can often be solved with vector arithmetic. Most famously,

But why? Why do arithmetic operators apply to vectors generated by non-linear models such as word2vec? What conditions have to be satisfied by the training corpus for these analogies to hold in the vector space?

There have been surprisingly few theories trying to explain this phenomenon. Those that do exist, including the latent variable model1 (Arora et al., 2016) and the paraphrase model2 (Gittens et al., 2017; Allen and Hospedales, 2019) make strong assumptions about the embedding space or distribution of word frequencies. There is no empirical evidence to support these theories either.

In our ACL 2019 paper, “Towards Understanding Linear Word Analogies”, we provide a formal explanation of word analogy arithmetic for GloVe and skipgram with negative sampling (SGNS) without making such strong assumptions. In turn, our theory provides:

Most importantly, our theory is also supported by empirical evidence, making it much more tenable than past explanations.

The Structure of Word Analogies

In the broadest sense, a word analogy is a statement of the form “a is to b as x is to y”, which asserts that a and x can be transformed in the same way to get b and y, and vice-versa. Given that this is just an invertible transformation, we can state it more formally:

These linear word analogies, such as $\vec{king} + (\vec{woman} - \vec{man}) \approx \vec{queen}$, are what we’d like to explain. When they hold exactly, they form a parallelogram structure in the vector space (by definition):

Parallelograms have several useful properties that we can exploit. For one, a quadrilateral is a parallelogram iff each pair of opposite sides is equal in length (and in higher-dimensional spaces, all four points are coplanar). This means that

In order to meaningfully interpret the conditions above, we need to be able to interpret the inner product (i.e., the dot product) of two word vectors.

However, the literature only tells us how to interpret the inner product of a word and context vector. Recall that SGNS and GloVe create two representations for each word – one for when it is the target word and one for when it is a context word (i.e., in the context window of some other word). The latter representation, called the context vector, is typically discarded after training.

We can interpret the inner product of a word and context vector because even though SGNS and GloVe learn vectors iteratively in practice, they are implicitly factorizing a word-context matrix containing a co-occurrence statistic. When the factorized matrix can be perfectly reconstructed, where $\vec{x}, \vec{y}$ are word vectors and $\vec{x}_c, \vec{y}_c$ their corresponding context vectors:

The first identity is the local objective of GloVe, where $X_{x,y}$ denotes the co-occurrence count and $b_x, b_y$ denote the learned biases for each word. The second identity is from Levy and Goldberg (2014), who showed that SGNS is implicitly factorizing the pointwise mutual information (PMI) matrix of the word-context pairs shifted by log $k$, the number of negative examples. Since the matrix being factorized is symmetric, $\langle \vec{x}, \vec{y}_c \rangle = \langle \vec{x}_c, \vec{y} \rangle$.

When do Linear Word Analogies Hold?

We now know the conditions that need to be satisfied for a linear analogy to hold exactly in vector space and how to interpret the inner product of two word vectors.

This means that we can now use the SGNS or GloVe identity above to rewrite these conditions in terms of statistics over the training corpus. Regardless of which identity we choose, we arrive at the Co-occurrence Shifted PMI Theorem (or csPMI Theorem, for short). Remarkably, even though SGNS and GloVe are completely different embedding models, the conditions under which analogies manifest in their vector spaces is the same!

For example, for $\vec{king} - \vec{man} + \vec{woman} = \vec{queen}$ to hold exactly in a noiseless SGNS or GloVe space, we would need the following to be satisfied by the training corpus3:

Yet they are said to exist anyway – why?

The Intuition was Right all Along

The original GloVe paper conjectured that an analogy of the form “a is to b as x is to y” holds iff for every word $w$ in the vocabulary,

This has long been considered the intuitive explanation of word analogies, despite lacking a formal proof. In our paper, we show that this conjecture is indeed true (at least for SGNS).

Vector Addition as an Analogy

This suggests that the addition of two SGNS vectors implicitly downweights the more frequent word, as weighting schemes (e.g., SIF, TF-IDF) do ad hoc. For example, if the vectors for $x =$ ‘the’ and $y =$ ‘apple’ were added to create a vector for $z =$ ‘the_apple’, and if this were actually a term in the vocabulary, we’d expect csPMI(‘the_apple’, ‘apple’) > csPMI(‘the_apple’, ‘the’). Although, in reality, most bigrams are not terms in the vocabulary, this helps explain empirical observations that averaging word vectors is a surprisingly effective way of composing them.

As mentioned earlier, a key problem with prior theories is that there is very little (if any) empirical evidence supporting them. Below, we present two empirical findings that lend credence to ours.

According to the csPMI Theorem, if an analogy holds exactly over a set of word pairs in a noiseless word vector space, then each pair has the same csPMI value. To test this, we count word co-occurrences in Wikipedia and calculate the mean csPMI values for analogies in the word2vec paper over the word pairs for which they should hold (e.g., {(Paris, France), (Berlin, Germany)} for capital-world). We then try to solve these analogies – in the traditional manner, by minimizing cosine distance – using SGNS vectors trained on Wikipedia.

In the table above, we can see that

To test the interpretation of Euclidean distance offered by the csPMI Theorem, we plot $-\text{csPMI}(x,y)$ against $\|\vec{x} - \vec{y}\|^2$ for SGNS vectors trained on Wikipedia: 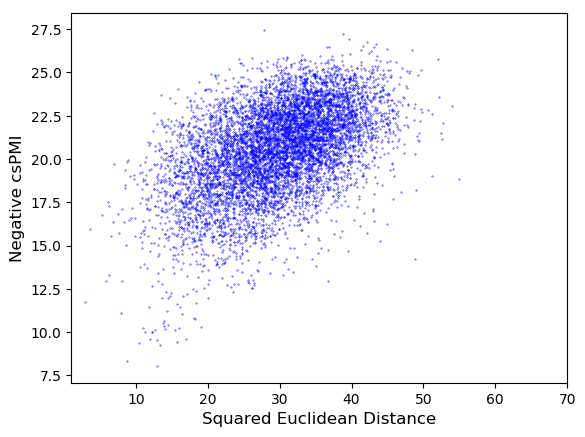 In a noiseless SGNS or GloVe space, a linear analogy holds exactly over a set of word pairs iff the co-occurrence shifted PMI is the same for every word pair and across any two word pairs, provided the row vectors of those words in the factorized word-context matrix are coplanar.

This, in turn, reaffirms the long-standing intuition on why word analogies hold, helps explain why vector addition is a decent means of composing words, and provides a new interpretation of Euclidean distance in word vector spaces. Unlike past theories of word analogy arithmetic, there is plenty of empirical evidence to support the csPMI Theorem, making it much more tenable.

If you found this post useful, you can cite our paper as follows:

Many thanks to Omer Levy and Yoav Goldberg for their helpful comments on an early draft of this paper, as well as the anonymous ACL reviewers. Special thanks to Graeme Hirst, Krishnapriya Vishnubhotla, Chloe Pou-Prom, and Allen Nie for their comments on this blog post. Thanks to Scott H. Hawley for catching a typo in the csPMI Theorem.